SCI was awarded the contract to design, engineer, fabricate and install a Stage Lift System and an Acrobatic Track System for the Venetian Macau Theater in Macau, China. The systems consist of 3 major elements and miscellaneous steel items: a turntable stage lifts (includes stage deck, infill and traps, a bridge crane systems, an acrobatic tracks and carriers and a spiral staircase.

The Stage Lifts for the Venetian Macau are self climbing, rack and pinion stage lifts, with turntables as the finished deck surfaces. There are three stage lifts, numbers 1, 2 and 3, respectively. Lift Number 1 is center stage, and is a four post lift. Lifts 2 and 3 are stage left and right of center, are three post lifts, and are mirror images of one another, across the centerline of the stage. The essential motivation for all three lifts consists of either a series of SEW Eurodrive AC Motors, driving MC Series 3-Stage Bevel Helical Gear Units, or fixed gear motor units. These gear motors are synchronized through both electrical drive synchronization and mechanical linkage.

The Bridge Crane is an overhead rigging system, similar to a gantry crane. It is a large truss that spans across the stage from left to right. A motorized carrier travels from left to right on a linear rail and rack attached horizontally to either side of the bridge beams and linear guide assemblies attached to the carrier itself. The Bridge Crane runs from behind the audience toward the stage and centers above the central Lift 1. The Bridge Crane travels on four (4) linear guide and rack equipped gantry beams. These four (4) beams are attached to hangers that are attached to the building structure. The carrier boasts two Stage Technologies Big Tow winches for raising and lowering performers and scenery. The Bridge hangs 10’ above the Oval Track at 102’ above ground 0.

The Oval Track (Track 1 & 2) is comprised of two (2) parallel tracks running in an oval shape. The Straight Tracks (Tracks 3 & 4) are comprised of two sets of dual parallel tracks, each suspended by hangers attached to the roof structure. The Oval and Straight Tracks hang ten (10) feet below the Bridge Crane. These acrobatic tracks are formed from ½” tongue and groove steel plates welded together to form custom H-Beams (Oval track plates are rolled to form desired radius curves).

The Acrobatic Tracks and Carriers are a means and method of conveying performers and scenic objects over the stage and audience areas. The Tracks are fixed steel rails, hung from the roof steel of the Theater.  The Carriers are the machines that drive themselves along the tracks, powered by electric motors that are fed by a bus bar system. 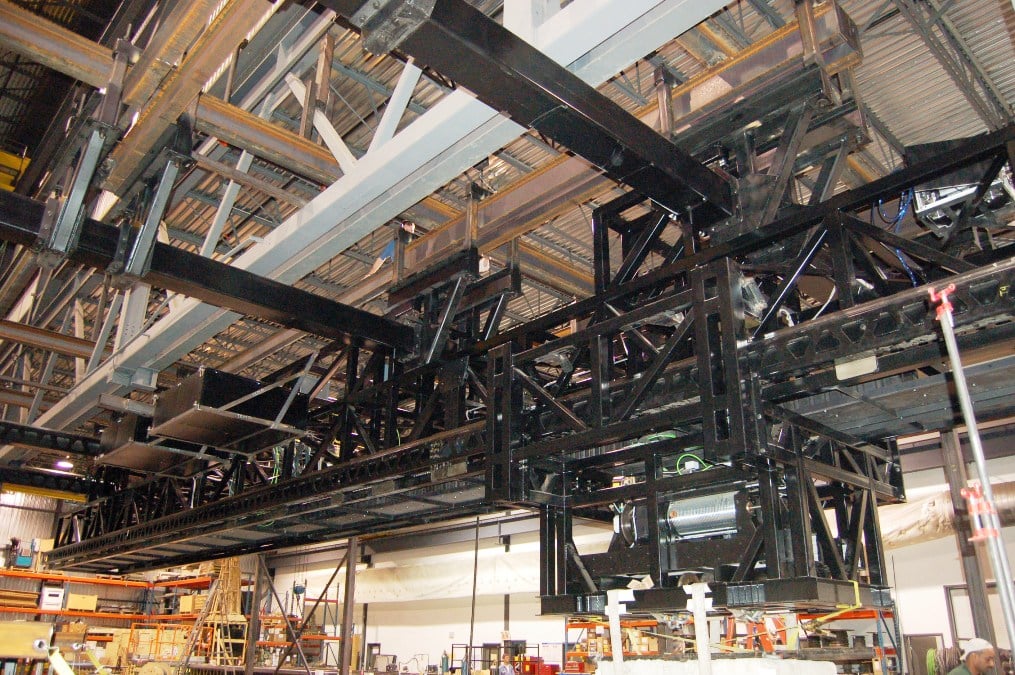